For the third time, Nigel asked Meg if she could collect his paintings from the local picture framers that he had taken in to be framed the month before. As Nigel worked in the city, he was unable to collect them himself during the week, when the framing store was open. 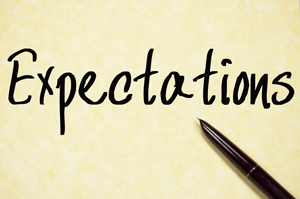 Meg agreed, and fully intended to do so. Yet every time he enquired, Meg said she had not done it yet.

There was always a reason why not. Nigel got more and more frustrated and refused to make the time to collect them himself.

He had asked Meg and now wanted to see how long it took her to get around to it.

After 6 weeks, Nigel got mad.

He yelled at Meg,

Why can’t you ever do anything for me? I’ve asked you repeatedly to collect those paintings, and you still haven’t. I’ve been waiting to see how long it would take you. I wanted them up on the wall when my parents came to visit last week, but no, even them coming wasn’t enough to motivate you to go and get them so I could hang them.

Meg was puzzled and hurt by Nigel’s outburst and thought it was childish of him to be “waiting to see how long it took”. She replied defensively,

Well, I intended to get them and even tried to on a couple of occasions. Once I had the chance to, but couldn’t get a park close to the store, and I knew I couldn’t carry the heavy things back to the car. Another time it was raining when I went past, and I didn’t want them getting wet. And last week I could have collected them, but the kids were crying in the car because it was their dinner time, and I had to decide, paintings or children. And the children took priority. So I drove straight home and fed them.

“That is entirely the point,” Nigel roared. “Everything takes priority over what Nigel wants. Nigel is never important in your life. It’s always someone else or something else that is given priority.”

Nigel was mad because he was feeling unloved and unimportant. He believed that Meg did not consider his feelings because she did not give him priority and do something simple that he asked of her.

On the other hand, Meg was hurt by his outburst and felt strongly that Nigel was inconsiderate blaming her for not doing a task that he could have done himself. Meg also was mad that Nigel could not see the obvious – that it was in fact a task quite difficult for her to undertake in terms of the weight of the paintings and having the children always with her.

As each one blamed the other for not considering their feelings, the resentments between them grew larger as did the tension and conflict between them.

Being inconsiderate means not thinking about the impact of your actions or words (or in this case, request!) on the other person. If you are able to consider how someone might feel, then you have empathy.

Neither Nigel nor Meg displayed empathy in the case study above. And neither of them communicated about the paintings – each had expectations about the actions of the other, and when those expectations were not met, each felt upset and resentful – and blamed the other for their feelings!

Are you able to be empathetic about your partners feelings? Do you manage your unmet expectations well? To get help on this make an appointment with Karen Gosling today.