Is your understanding of your emotional brain affecting your relationship?

Do you feel a racing heart, clammy hands, a tightening in our abdomen, and an urge to use our bowels when things are going wrong?

To perceive emotion is to receive and interpret information from both external (world) and internal (body) environments and is the starting point to understand your emotional brain. Your senses – sight, smell, touch, taste and hearing – connect you to the world around you, through your physical brain.

Perception is the process by which information (events) about the outside world impinges on the sensory organs and is then decoded and interpreted by the brain – resulting in a conscious experience (behaviour or response). Perception is one aspect of cognition – all the mental activities which enable us to know and make decisions (appraisals) about the world (our environment).

The Emotional Brain
Four major brain regions are: the brain stem, cerebellum, neocortex (cerebrum) and limbic system. The limbic system – comprising the thalamus, hypothalamus, hippocampus, amygdala, and connecting pathways – mediates and expresses emotional, motivational, sexual and social behaviors, and memory. It is the interaction between the “thinking” part of the physical brain (prefrontal cortex) and the limbic system that we call the emotional brain. 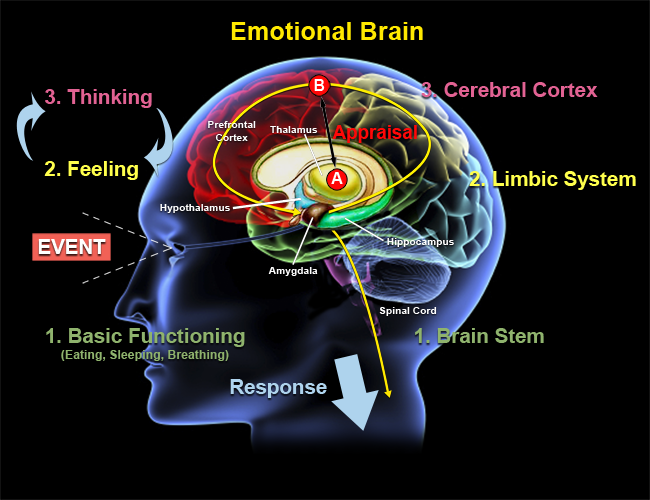 To understand the emotional brain we have to recognise that the brain controls all involuntary functions at the same time. These include breathing and heartbeat, as well as the higher mental processes such as thought, and the physical activities of breathing, movement, and coordination, plus non-physical functions such as emotions. It regulates bodily functions and is the seat of your personality.

The brain absorbs information from the outside world, interprets it, and makes the body act accordingly. It does this through a fascinating process of communication between specialised brain or neural cells – called neurons – that fire electrical impulses, or thoughts.

The largest web of neocortical functioning in the brain is between the prefrontal area and the limbic structures – the emotional brain. This perhaps explains the great variety of emotions that humans experience. The amygdala plays a large role in emotion processing.

The key to creating emotional health is putting a gap between event and response – see the diagram above. When impulse happens, usually from the amygdala (the fear centre of the brain), meaning is formed through appraisal. It is in the gap that the trigger – the conditioned response – occurs and you experience the response in your body.

For example, your first experience on a roller coaster may be exhilarating or terrifying. The memory will be stored as such, and will be recalled at any time the words roller coaster is mentioned. In this way you form emotional habits. The good news is that cognitive reframing allows you to change your emotional habits to enjoy a life of ease!

Appraisal, through the operation of the thalamus, hypothalamus, and limbic system, is the trigger for emotional response. Appraisal is a source of autonomic (involuntary) arousal, as the emotional response is mediated by the autonomic nervous system. The physiological effects of accumulated arousal felt in the body can be severe resulting in physical pain.

Autonomic Nervous System – ANS
Our central nervous system is a regulatory structure that helps people adapt to changes in their environment. The ANS is comprised of two parts – voluntary and involuntary. We use our voluntary nerves to direct our muscles within our body to move, more or less, at will. The involuntary nervous system helps our glands control the functioning of our organs, such as; heart, lungs, bowels, and digestion.

When our bodies are in a peaceful state, the two branches of the ANS are in check. However, when there is a stressful response or threat – anger, fear, sadness, disgust, or surprise – the sympathetic (fight, flight) branch dominates the parasympathetic (calming, restorative) branch, and we are aware of our organs functioning. This is critical to understanding how our emotional brain functions.

We may feel a racing heart, clammy hands, a tightening in our abdomen, and an urge to use our bowels. Sympathetic nerves react this way by means of the chemical, Adrenalin, which is released at the nerve-endings of the organs concerned. For any task, there is an optimum level of arousal at which performance will be most efficient. On the whole, moderate levels of arousal seem to act as positive reinforcers and extreme as negative.

Understanding your emotional brain is one of the most important steps in rebuilding your relationship.