Someone who has the anxious personality is constantly on edge

A person with the anxious personality experiences an overreaction to threatening stimuli in his or her environment, resulting in the body having a greater stress response than another person might have to the same event. The anxious person is less able to tolerate the normal uncertainties about the future and the “dangers” that may arise. This may be about external events – such as terrorist attacks or planes crashing – or relationship or health issues: “What if he doesn’t really love me?” or “What if I’ve got cancer?” 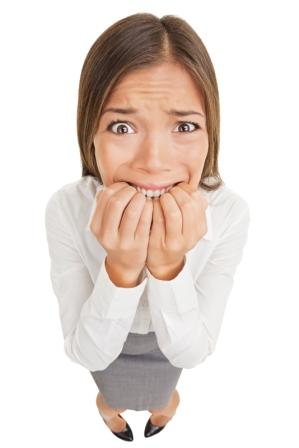 People with anxious personalities tend to have a general, although often subliminal, belief that the world is a dangerous place and that they must always be on guard to prevent or control any threat to their body and psychological well-being. Their thoughts are frequently dotted with ‘what ifs’ and ‘maybes’. Behavior is driven by a desire to minimize or eliminate the stimuli or the situation that is causing the stress response. For example, the person who always says YES when the boss asks him to take on more work may be considered an obliging person. It may be however, that he is anxious about criticism or disapproval if he says no.

Sometimes the anxious person is not aware that he experiences anxiety. The physical manifestations of discomfort and changes to the gut or bowel, or problems with the immune or nervous systems, are often seem as physical problems requiring tests and treatment, and the cognitive (thinking) involvement is not at first recognized.

Yet every fearful or negative thought (which then becomes the threatening stimuli) causes the body to produce some adrenalin, a stress chemical that prepares the body for fight or flight in the event of the stimuli actually being dangerous. The adrenalin stores in the muscles, maintaining a sense of “readiness” should the danger ever present. The feeling of stress or being “on guard” can result in one small event triggering an intense response due to the build up of adrenalin in the body. Others may see this as an overreaction.

Many anxious people are sensitive, and are commonly known as worriers. The sensitive person has a brain that is sensitized to threat, and instructs the body to produce adrenalin at the first hint of there being a stimulus that could in any way be dangerous to the person. This could be external stimuli (heat, noise, unpleasant smells, crowds, bright lights, scratchy clothing, food with strange textures) or internal perceptions especially pertaining to being disapproved of, disliked or criticized. This person may have a strong physical/adrenalin response (called flooding) to irritable tones, raised voices or a suggestion of conflict in their environment, regardless of whether or not the conflict is directed at them. They may startle easily.

The adrenalin arouses the nervous system, creating the “anxious” feeling, even before the person can rationalize the situation. But once the brain recognizes the adrenalin arousal, it begins to “watch out” for the danger, and the thoughts then commence, ‘what if’ this and ‘what if’ that. The thoughts typically flow to the person’s vulnerability at the time, which may be about their health, finances, relationships, children, work, being disliked, being inadequate – there is always something the brain will find as dangerous to justify the physical anxious sensation.

It is important for sensitive people to recognize the difference between adrenalin arousals that the body is having due to various stimuli, and anxiety that is fear of something in the future, and has thought and cognition attached. This recognition can assist the anxious person to stop the negative or fearful thinking that results in flooding, and thereby minimize his own anxious response. “I am my own worst enemy,” is the expression of someone who recognizes that her own thinking adds to her personal stress.

People with anxious personalities can be difficult to live with because their oversensitive alarm system causes them to intensify their emotional response to almost everything. People whose bodies are flooded with adrenalin have more mood changes and more periods of intense emotion. They tend to feel disappointment more keenly, react with greater distress to rejection or failure, and get more upset over arguments.

Depending on their emotional style, they may be more defensive and fly off the handle or they may be taken aback (frozen) by comments or conflict, and ‘shut down’. The person who withdraws takes time to “get over” emotional hurts as it takes time for the body to discharge the stored adrenalin. It can take up to 60 minutes for the body to return to normal after a strong adrenalin surge, such as in an argument with a spouse. This makes the anxious person feel that it is impossible to “let go” emotional hurts. Unfortunately, the more he dwells on these resentments, the more adrenalin is produced, and so the anxious cycle continues.

A further consequence of anxiety is lowered self-esteem, and chronic anxiety attacks a person’s confidence. Anxious personalities often see themselves as too emotional, out-of-control, and not coping as well as they would like.

The body will restore to calm once the brain registers that “everything is alright”. You can do a number of easy exercises to calm yourself down if feeling anxious:

Knowing about the anxious personality is one of the most important steps in rebuilding your relationship.