How do I stop my husband flicking through and changing TV channels?

Some years ago, Karen worked at a hospital with mainly female social workers. When a guy called Steve joined Karen’s team, the girls always found it interesting to hear a male’s perspective on how men thought about things, how they dealt with relationship issues and communication differences between men and women. 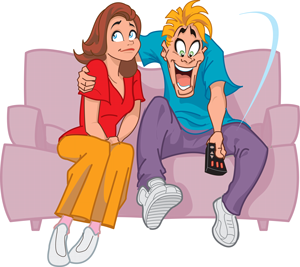 Steve was always quite happy to talk about his feelings with his female colleagues and share his own relationship experiences which, they told him, is not common for a male to do. However, Steve said that he had learned a lot about himself in his social work studies and was happy to share.

Some differences between males and females never change however.

During one meeting the girls were laughing about their husbands always flicking the TV remote and how it drove them crazy. Every single female present agreed. Steve was fascinated with the discussion, as he had no idea women felt like this. In fact he didn’t realize that women had a feeling about it at all. He told the girls that he did this all the time – flicking from channel to channel. He had never stopped to think how his wife might feel about that.

Steve confessed to the girls, since they were talking about that topic, that his remote had broken the night before while he was watching TV. The females present scornfully asked him, “Whatever are you going to do without your remote, Steve? How will you survive?”

Steve didn’t pick up on their sarcasm. He said that there was no problem having no remote – he simply lay on the floor in front of his TV and continued to change the channels on the set box USING HIS BIG TOE!

To find out why men have to always change channels on the TV and what you women can do about it, keep reading…

A woman relaxes by becoming involved in a TV program or even watching ads (a legitimate “time out = I can sit and relax and do nothing” time).

Men on the other hand will use the TV remote and flick from channel to channel during the ads… they love gadgets and playing with them, and find it relaxing to do so. Men have no idea that this action can annoy their wives so much.

When the man becomes absorbed in something on another channel and does not return to the original show, his wife becomes exasperated almost to screaming point. She becomes distressed that she will miss some of the story line when the show recommences. A woman interprets his action as, ‘he has no regard for what I’m interested in, he is selfish, he is bored with what interests me – in fact, he no longer loves me’.

At that moment, she may even consider going off with someone else who cares more about her!

For men, it is none of the above, and flicking the remote certainly doesn’t mean they don’t love their wife! That’s why they simply cannot understand their wife’s state of upset and anger. To them, there is absolutely no connection between the two things.

Men just love flicking the remote, it relaxes them. And to them, ads are meant to be used for that activity – checking out what’s happening on a different channel in case another show captures their interest more.

To reprogram your man to stop flicking the remote, try BEHAVIOR MODIFICATION – you know, the sort of things you do when you are trying to change your child’s behaviour!

Here are some suggestions… if any one of them works, you’ll be happier, and he may be!

Make an appointment with Karen Gosling to help resolve issues in your troubled marriage caused by you man flicking through the TV channels.