5 Days later and fed up with the silence, Mike asked me, "So when are we going to start speaking again?"

I said, "You know very well what you've done. I'm wounded because you yelled at me." I had dwelt on it so many times since last Sunday.

Thirty years ago, Mike and I owned a 76 acre (30 hectare) rolling hills sheep property in the Adelaide Hills, South Australia. It was a beautiful place with two dams and stocked with around 100 Border Leicester ewes, which lambed every spring. When we bought the property it had no internal fencing, so Mike drew up a design for the various paddocks and we set about putting up the fences – putting out fires.

One Sunday, the two of us worked all day together, putting in fence posts. This involved me holding a new post in position as Mike lined it up from afar. 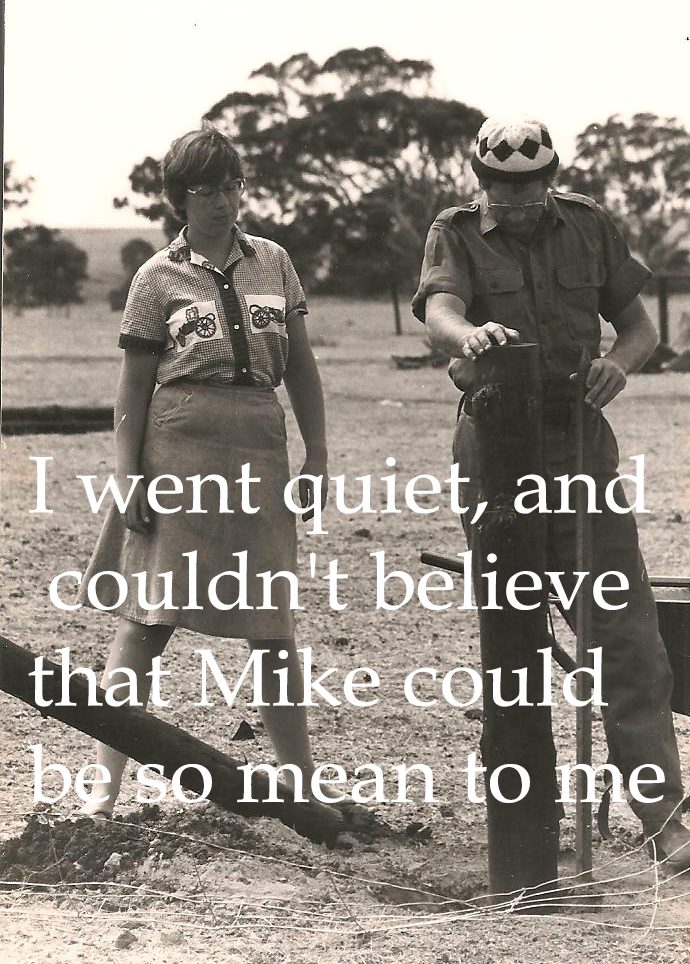 I would then hold it in place while Mike came back and dug the hole, then the lining up would happen a second time. Then Mike came back and pushed dirt back into the hole, and made the dirt firm around the post in its new position, using a crowbar. Back and forth, lining up, digging, pushing in soil, and ramming the crowbar. Hard, hard work, hour after hour, the two of us working as a team.

Late in the day, after a large corner post had finally been rammed into position, Mike went back to check the work done. And the corner post was out of alignment (according to Mike’s eye that demanded perfection). Mike blew up. He shouted and ranted about the post being in the wrong position, and swore at the “stupid bloody thing” and “now we’re just going to have to get it out and do it all over again. It’s not good enough.”

I went quiet, and couldn’t believe that Mike could be so mean to me, when I had been nothing but patient and cooperative all day. How could he attack me like that?

The tension between us did not abate that evening, and I gave Mike the “cold shoulder” into the next day whilst I waited for an apology from him for his unnecessary outburst. An apology did not come, so the “no talking” between us continued. Not a word between us until later on the Tuesday, when civil courtesy returned, “Do you want something to eat?” “Can you drive me to work tomorrow?” But no warmth. I was still waiting for an apology. I had been wounded and believed that Mike should apologize for his behavior on the previous Sunday.

On Thursday, fed up with the silence, Mike asked me, “So when are we going to start speaking again? What are you sulking about?” I was incensed. “I’m not sulking. I’m wounded.” “What on earth are you wounded about?” Mike wailed, totally frustrated. “What have I done now?”

Sarcastically, I said, “You know very well what you’ve done. I’m wounded because you yelled at me.” Bewildered, Mike said, “Yelled at you? When did I yell at you?” And so with great self-righteous indignation, I repeated word for word, what he had yelled at me on Sunday. I had dwelt on it so many times since then, I now knew the scene off by heart.

Sheepishly now, I said, “Well of course I would think you were yelling at me, I was the only one there.” I of course, being a sensitive and avoidant person, had not ever yelled at a person, and certainly not at an inanimate object. That to me, didn’t make sense. No wonder I had assumed that Mike had been yelling at me. But I suddenly realized I had got it wrong, which explained why there had been no apology.

Then Mike asked the question that changed the course of our relationship. He said, “So I wasn’t yelling at you but anyway, even if I was, how did that make you feel?” I finally was given the opportunity to release what had been going around in her head for four days. “When you yell at me, I feel disrespected, I feel you don’t value me, I feel like I’m a nuisance and that you don’t want me doing things with you, I feel you don’t love me and that you wish you weren’t married to me.”

I could see Mike was flabbergasted as he gasped, “You feel all those things when I yell at you?” “Yes”, I replied, with the tone that indicated, “Of course, doesn’t everyone?”

Mike continued, “Nothing could be further from the truth. I had absolutely no idea you feel that when I yell! Because I do respect you and I do value you. I do not consider you a nuisance and I love doing things with you. I absolutely love you and I always want to be married to you. I cannot believe you think those things because I yell! However, now that I know that that is what you feel, I am going to try very hard not ever to raise my voice again when you are around. But I have always yelled and I am bound to make mistakes. So if my part of the bargain is that I will try not to yell at you, can YOUR part of the bargain please be that when I make a mistake and I do yell, can you please say to yourself, “This does NOT mean he doesn’t respect me, this does NOT mean he doesn’t value me, this does NOT mean he doesn’t love me.” Because Karen, those thoughts are only your interpretation. It is not reality.”

This event was a turning point for me as it was the first time in my life that I realized that not everyone experienced events the same way that I did, and that my interpretation of events and feelings were mine alone. This helped me understand why I had been hurt by people’s words and actions in the past, when I had been puzzled that a person would behave in a way so very different to how I would behave. And I also realized I wasn’t always right and that I had to be careful about my “holier than thou” attitude at times, which I realized, impacted on others.

Knowing how to manage conflict is one of the most important steps in rebuilding your relationship.