Why do men get angry so easily? 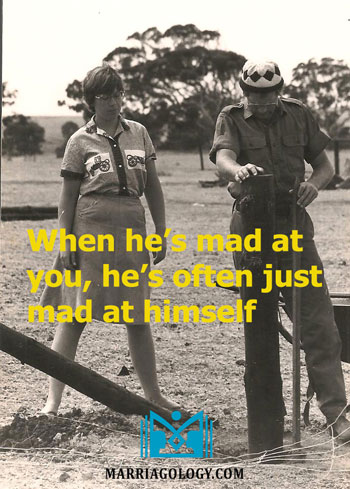 I remember once when Mike and I were working outside together putting up a new fence. I was holding the posts while he lined them up and secured them in to position. Once finished, Mike checked our work and the corner post was out of alignment and he blew up. He shouted and ranted about the post being in the wrong position, and swore at the “stupid bloody thing” and “now we’re just going to have to get it out and do it all over again. It’s not good enough.”

I went quiet, and couldn’t believe that Mike could attack me like that, when I had been nothing but patient and cooperative all day. He had got mad at me for no reason.

I was still quiet and tense the next day whilst I waited for an apology from him for his unnecessary outburst. An apology did not come, so the “no talking” between us continued for another day. On the third day, civil courtesy returned, “Do you want a cup of coffee?” But no warmth. I was still waiting for an apology.

On the fourth day, fed up with the silence, Mike asked me, “So when are we going to start speaking again? What are you sulking about?” I was incensed. “I’m not sulking. I’m wounded.” “What on earth are you wounded about?” Mike wailed, totally frustrated.

Why did he get mad so quickly?

Sarcastically, I said, “You know very well why I’m wounded – you yelled at me.” Bewildered, Mike said, “Yelled at you? When did I yell at you?” And so with great self-righteous indignation, I repeated word for word, what had happened a few days earlier. I had dwelt on it so much, I now knew the sentences off by heart.

Sheepishly I said, “Well of course I would think you were yelling at me, I was the only one there.”

I had assumed Mike had been yelling at me.

But I suddenly realized I had got it wrong, which explained why there had been no apology.

Then Mike asked a question that changed the course of our relationship. He said, “So I hope you believe me that I wasn’t yelling at you. But anyway, even if I was, how did that make you feel?”

I could see Mike was stunned. “You feel all those things when I yell at you?” “Yes”, I replied, with a tone that indicated, “Of course. Doesn’t everyone?”

Mike continued, “Nothing could be further from the truth. I can’t believe you feel like that when I yell. I do respect you and I do value you. I do not consider you a nuisance and I love doing things with you. I absolutely love you and I always want to be married to you. I cannot believe you think those things because I yell!”

Mike continued: “Karen, those thoughts are only your interpretation. It is not reality.”

At this point I realized that not everyone experienced things the same way as me, and that my interpretation of events and feelings were mine alone. And I also realized I wasn’t always right and that I had to be careful about my “holier than thou” attitude at times, which I realized, impacted on others.

To learn more about the importance of great communication in your relationship… how Men and Women Communicate Differently – and how interpreting things wrongly can wreck relationships, make an appointment with Karen Gosling today.