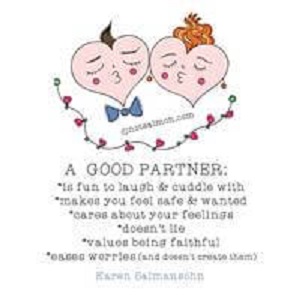 Ted and Gina came for counseling as Ted was fed up with Gina’s insecurities regarding him being with other women. He had set Gina an ultimatum – get counseling or get out. He had had enough of her insecurities, jealousy, suspicions and accusations, her questioning and double-checking. He felt that he scarcely had a life of his own any more, as Gina was always asking him where he had been, who he had been with and what he had talked about.

To him, all Gina’s questions of jealousy seemed crazy – and Gina admitted in the counseling session that her suspicions of Ted were unfounded, and that there was no hard evidence to suggest he was unfaithful. However, Ted’s recent outburst that he had had enough (brought on by her constant questioning, she knew), had escalated her fears and insecurities.

Gina said that she often tried to not ask Ted about his movements, but then her fears got the better of her. She also stated her belief that if she didn’t ask him who he spent time with, Ted would have complete freedom to do whatever he wanted! Ted was perplexed, and asked her what exactly she meant by that.

Gina clarified her fears that if he was having an affair, she might be viewed as a fool who stood by and let it happen. This explained why she kept asking, to reduce the risk of her being seen as a fool! Ted felt dumbfounded and hurt and told Gina he was finding it difficult to be in a marriage with a wife who did not trust him.

We discussed in the session that previously, when Ted had expressed frustration at her constant questioning, Gina interpreted this as defensiveness, which reinforced her view that Ted was having or at least thinking about having an affair. He often went out with colleagues after work, and had ample opportunity to have an affair when he was away on business trips. She knew that he was a very sociable and outgoing man, who engaged easily with all he met, and whilst this was a quality she adored about him, it added to her insecurity.

Karen’s Assessment – Reasons for Insecurity and Jealousy in Relationships

I explained to Gina that her fears and insecurity were driving away the man she loved and wanted to be with. Gina replied that although she knew this, and indeed wanted to trust, her feelings wouldn’t let her. She wanted Ted to behave differently so that she didn’t feel so bad.

In turn, I outlined how negative feelings of anxiety and suspicion are aroused in the body, and why they were hers alone, based on her own fears. I went on to explain that whilst she genuinely felt the feelings in her body, she was blaming Ted for them. She had to now take the responsibility of dealing with them.

Summary – Insecurities and Jealousy in Relationships

There is work to be done in a marriage where insecurity and jealousy is present. The jealous partner must learn to manage their own negative emotion and not always blame their partner. However, whilst a person is responsible for their own feelings, each one, in love, has to do something different in order to assist the other.

Marriage is about giving to, not always hoping to get something from, the partner. Then when one feels truly loved, it is easier to respond spontaneously and more fully. In this way, each partner feels fulfilled and secure in the relationship. And the relationship gets stronger!

What you can do to help with Insecurities and Jealous

If you want to know how to deal with your insecurity… if you want to be able to feel you can trust your husband again like you used to (or perhaps you never did? Then this is especially important for you!)… then head on over to our Change Your Man Toolkit and learn more about how it can help you.

In the Toolkit, you’ll learn tips and on what to do when you are feeling insecure so that he does things a bit differently.

And that’s not all. There are plenty more tools in the Toolkit that will help you have a better relationship, like how to get him to communicate better with you… and how to get him to show you that you really are the center of his world!

Make an appointment with Karen Gosling to learn how not to be insecure and jealous in your marriage.