Linda often felt let down by her husband Trevor. She would ask him to do something that meant a lot to her, and he would agree at the time. But then he never followed through.

The more it happened, the more she felt let down and the more resentful she became. 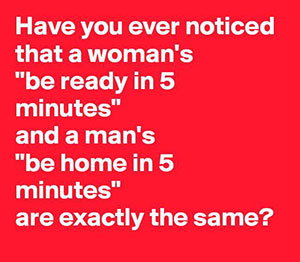 Linda was aware that her Love Language was Acts of Service and Time. She felt loved when Trevor did things for her when she asked.

(Don’t know what Love Languages refers to? Find out below)

Trevor getting home after work when he said he would, to have dinner with the family, meant to Linda that he loved her and considered her feelings. But time and time again, Trevor would get held up at the office and arrive home late.

Linda asked him to make their meal time a priority, so that he could see the children and spend some time with them as well as with her.

Trevor could see that would be quality family time, and agreed to phone Linda just as he was leaving the office, so she could expect him at a certain time, give or take some minutes for traffic flow.

Typically it was 45 minutes to an hour before he got home, leaving Linda dismayed and feeling a low priority, quite apart from the meal that had been spoiled as she had waited to serve it up once he got home. Often she had fed the children already, by the time Trevor got home.

In this situation, the wife feels let down by her husband as her expectations have not been met. This makes her feel that she is not a priority!

Linda’s unmet expectations are resulting in her negative feelings of disappointment, irritability and resentment.

These are the normal reactions to an unmet expectation, but all of them are negative, and feel like you’ve been hurt. They can be felt immediately or build up over time.

Typically, the person who has the negative feelings blames someone else for them.

Linda says: “Trevor agreed with the plan of being home at meal time, then when he doesn’t make it, I feel let down and hurt”. She blames him for her bad feelings. She wants Trevor to do something different so she doesn’t feel so bad.

Trevor says: “Actually, Linda lets me down sometimes as well. When the family is preparing to head out somewhere, Linda gets the children ready first, then gets ready herself.”

“But then she always has last minute things that she does before getting into the car. For example, she’ll close windows, or hang out a bit a washing to dry while we’re away.”

Trevor said he also feels let down when this happens, and internally, blames her for his grumpy and irritated feelings. He wants Linda to do something different so he doesn’t feel like this.

Many of our negative feelings come from Unmet Expectations

If you are ready to DO THINGS DIFFERENTLY with your man and fix your troubled marriage before it’s too late, make an appointment with Karen Gosling today!