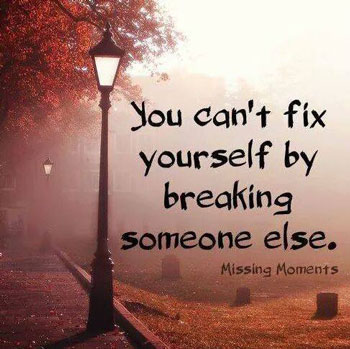 The person who is a blamer is unable to see that their own behavior contributes to their own misfortune or misery. They’re very quick to blame somebody else and never accept responsibility for their unhappiness or lack of success in any area of their life.

The blamer is often unhappy, and genuinely believes the reason to be because someone has not met their expectations of doing or saying things that makes them feel good.

They believe it is someone else’s responsibility to make them happy. In a close relationship, that’s you, which explains why if something goes wrong, or if she’s not happy, it’s your fault.

The wife who blames is unable to see that her behavior actually drives her husband away and makes it very difficult for him to show the love, respect and appreciation that she is seeking.

Sometimes, blamers can be nasty and aggressive and deliberately refuse to cooperate – but they always have a reason why their behavior is someone else’s fault.

This pattern of behavior goes on when one person has a perspective, experiences emotional pain, but refuses to talk about it. Others are meant to intuitively “know” what is causing the blamer to be sullen or hostile and to apologize (often without good reason) or do something to change the blamer’s mood. This way of behaving eventually drives people away.

Blaming behavior wastes so much emotional time and productive time both for the blamer and the recipient, who typically feels very defensive and stressed when at the receiving end of this type of behavior.

Without help, these sorts of relationships do split up.

Usually the partner of a blamer finds the accusations to be quite unfair, but tries to adjust his behavior to prevent the blamer being too upset.

If this is you, you may put up with them because you love her. When you met, you thought you were a lucky guy because this woman was the best thing since sliced bread – you committed readily to the relationship because you were very much in love with her. But suddenly, you start having arguments because she is unhappy with you. Then after a while you start having more hostile disagreements. And she starts getting mad at you. Really mad!

When you get blamed for everything that’s wrong in your relationship, you will become angry, defensive and stressed. To find out more about how to manage this blaming personality make an appointment with Karen Gosling today.