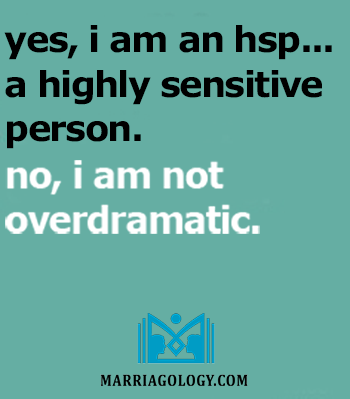 In fact HSPs – as they are called – make up about 20% of the population.

That question, “Whatever is the matter with you?” can finally be answered!

The sensitive trait that you thought all your life was a flaw, can now be renamed as a special gift!

HSPs are often intuitive and have strong “gut level” feelings.

HSPs are empathic and compassionate people as they are deeply affected by other people’s moods and emotions. They learn without being aware they have learned, simply because they are aware of what’s going on in their environment.

The Highly Sensitive Person has a sensitive nervous system, a neurological trait. It means you are aware of subtleties in your surroundings that others are not, and will be on guard for potential danger from external stimuli. This may mean bright lights or wet pavements! It also means you are more easily overwhelmed when you have been out in a highly stimulating environment for too long, bombarded by sights and sounds (or perhaps heat) until you are exhausted in a nervous-system sort of way.

A certain amount of stimuli can initially feel good to the HSP, but when it is “too much” the stimuli become disturbing. For example, loud music and large crowds can be highly stimulating (in a bad way) to the HSP nervous system, and thus stressful. The HSP will want to escape these environments and often needs time to be alone to give his nervous system time to calm down.

HSPs can feel out of step with the rest of the world.

Because HSPs are in a minority, they are easily “hurt” or affronted when non-HSP people speak to them in a way that the HSP would not, The HSP cannot understand how others can be so direct, critical or confrontational. Typically the HSP will not challenge the interaction but simply withdraw and then dwell on the interaction that took place, trying to work out what went wrong, and what he or she could have said differently to prevent the non-HSP from getting upset.

Meanwhile, the non-HSP has no idea that anything is wrong. Conflict and arguments don’t worry him. But the HSP can only function when there is harmony. Conflict, even raised voices, can arouse the HSPs nervous system, causing him to “hurt”. This is why HSPs are the peacemakers, the ones in the family trying to calm others down and get on well together.

Highly Sensitive People often become easily overwhelmed in new environments, and particularly in medical environments! The nervous arousal of the body is experienced as anxiety, because this is the word that is most commonly used to describe the physiological feeling. However, it is important not to confuse arousal with fear.

In a new situation, it is common for the Highly Sensitive Person to feel cautious and fearful due to the arousing chemicals (adrenalin and cortisol) produced in the body in, even when he or she does not consciously have anything to be fearful about (for example, going to the dentist). This is commonly what HSPs consider an indication of their “craziness”.

But HSPs are not crazy at all. They are “on guard” for any additional or new stimuli, or things that may go wrong, which is why HSPs can be real worry warts! Coaxing and encouraging the HSP to try something new will be more effective than forcing him to do it or criticising him for not wanting to have a go. They will do it, but in their own time!

If you are an HSP and are ready to do things differently in your marriage and get back your life and your self-esteem, make an appointment with Karen Gosling today!